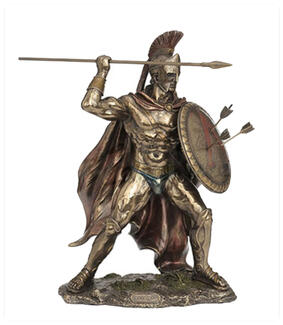 SKU# CE76534B4 This extremely detailed and well made statue is made of cold cast bronze. The special production process of this piece originated in Great Britain and uses actual bronze powder mixed with cold cast resin in order to ensures a richer and more authentic presentation. Statue measures 12 3/4  inches tall, 8 inches wide, 3 inches deep, Weight 6 lbs. and the bottom of the base is lined with felt to prevent it from scratching delicate surfaces. The bronzed finish emphasizes the detail of the piece; from the texture of the grass he stands on to the markings on the shield. Also available are either a wood base, or a wood pen set/base (with two pens).  With any base, an engraved plate with your choice of words (up to three lines) is included in cost (send e-mail with engraving requested).

NOTE: The spear is packaged on the outside of the styrofoam that contains the statue. When ordered with wood base, the felt on the bottom is removed and replaced by attachment material..base is NOT attached when shipped.

History Of Leonidas: Leonidas was a fifth century Spartan military king whose stand against the invading Persian army at the pass of Thermopylae in central Greece is one of the enduring tales of Greek heroism, invoked throughout Western history as the epitome of bravery exhibited against overwhelming odds. After the Persian army of Xerxes invaded Greece, the Spartan army prepared to join the armies of the other Greek states and march to face the Persians, but a religious festival delayed the departure of the army, so Leonidas bravely led a small force of Greeks, mostly his Spartan royal guard of 300 soldiers, but also Thespian and Thebans, against the much larger Persian army, at the pass of Thermopylae (Pillars of Fire) in 480 B.C. There, Leonidas and his men held the pass for 3 days (Their tight phalanx wall and discipline were no match for the Persians) and was defeated only after a Greek traitor revealed to the Persians the existence of a mountain trail that allowed them to outflank and attack the Greeks from the rear. All the Spartans and Thespians died, including Leonidas. Those 3 days gave valuable time to the Greek armies to prepare for battle and later defeat the Persians.